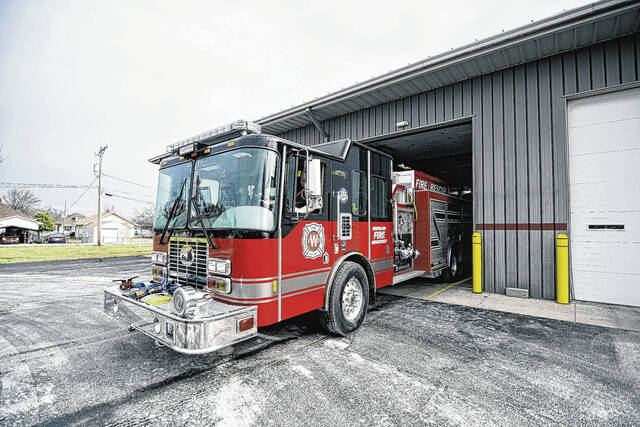 Whiteland’s firefighters and police will get a boost with the city’s $1.02 million allocation from the American Rescue Plan Act (ARPA).

Indiana officials distributed $1.28 billion to local governments, including $1.02 million to the city of Whiteland. The city received half the money and the state is expected to disburse the other half later this spring.

ARPA was signed into law on March 11. Since then, Whiteland officials have figured out the best ways to spend the money as required by law.

The money can be used for five main purposes, including: responding to the COVID-19 public health emergency; respond to the negative economic impacts of the emergency; offer a bonus to employees; compensate for the loss of public revenue; and upgrading water, sewer or broadband infrastructure.

Whiteland City Council approved a plan to split the money between police and firefighters, as the two were integral to helping the city respond to the pandemic.

The Whiteland Fire Department will use $613,800 to staff three firefighters at the city’s fire station 24/7 at a rate of pay of $12 per hour plus expenses salaries for the next three years.

The fire station has had a team of two employees working 24 hours a day, 7 days a week for several years. This was enough to send an ambulance, but not enough to send a fire truck. So if a third person wasn’t on site when called, the crew would have to wait for another person to show up for work before deploying a truck, said Whiteland Fire Chief Eric Funkhouser.

Now the city will always have the ability to deploy a truck at any time, which should improve response times and make the city less dependent on other neighboring departments, Funkhouser said.

The $12 salary also represents a salary increase for the employees. Currently, firefighters receive a stipend based on the state minimum wage of $7.25, which is much lower than what is offered at other fire departments in the area, he said.

The new hourly wage is still a bit low, but represents a marked improvement over before, he said.

Neighboring departments offer part-time wages ranging from $10 to $18 per hour.

“We are at war with everyone, whether it is EMS or firefighters. (The) $12 (salary increase) is a huge step in the right direction from where we were,” Funkhouser said. “Our ultimate goal is to increase this in the future and work our way to a full-time station.”

ARPA funds will cover the changes for three years. It buys time for Funkhouser and the city council to figure out a way to make the changes sustainable in the long-term budget and to consider building on the changes as the city grows, he said. declared.

Until ARPA funds provided a shortcut, it was a waiting game for tax revenues to grow enough from new businesses and housing to raise wages and increase staffing levels, Funkhouser said.

The salary increase will allow him to reward long-serving staff members and increase the pool of people willing to work for the department. With salary increases in other departments and in the private sector, it has become more difficult to retain staff, he said.

The payroll changes will take effect on Monday and the new rotation is filling up quickly, Funkhouser said this week.

The Whiteland Police Department will use $409,200 to purchase six police cars, 14 laptops or tablets to install in the cars, 15 body-worn cameras, one body-worn camera for the department’s K9 officer, 14 ballistic vests and helmets, 15 tasers and cartridges, up to two drones, four desktop computers and $15,500 in miscellaneous supplies.

Much of the funding is being used to upgrade existing equipment that would have taken years to replace without the additional funds, said Whiteland Police Chief Rick Shipp.

“With a small town and a small budget, it’s hard to replace all of that at once,” Shipp said. “The US bailout is really helping us replace that equipment much faster.”

Several items, such as the K9 Officer Body Camera, Drones, and Ballistic Equipment will be new to Officers.

The drones will be useful for accident investigation and search operations outside and inside the large warehouses that are popping up near the Interstate 65 interchange, he said.

Ballistic vests and helmets won’t be for everyday wear, but will be kept in police cruisers if officers are called to respond to a critical incident, Shipp said.

“It will make our officers safer and it will make the city safer. This will give us the opportunity to do more and be more competent in our response. It also helps us be more transparent,” he said.

MoneyLion Completes Acquisition of Even Financial, the Market Leader in Integrated Finance