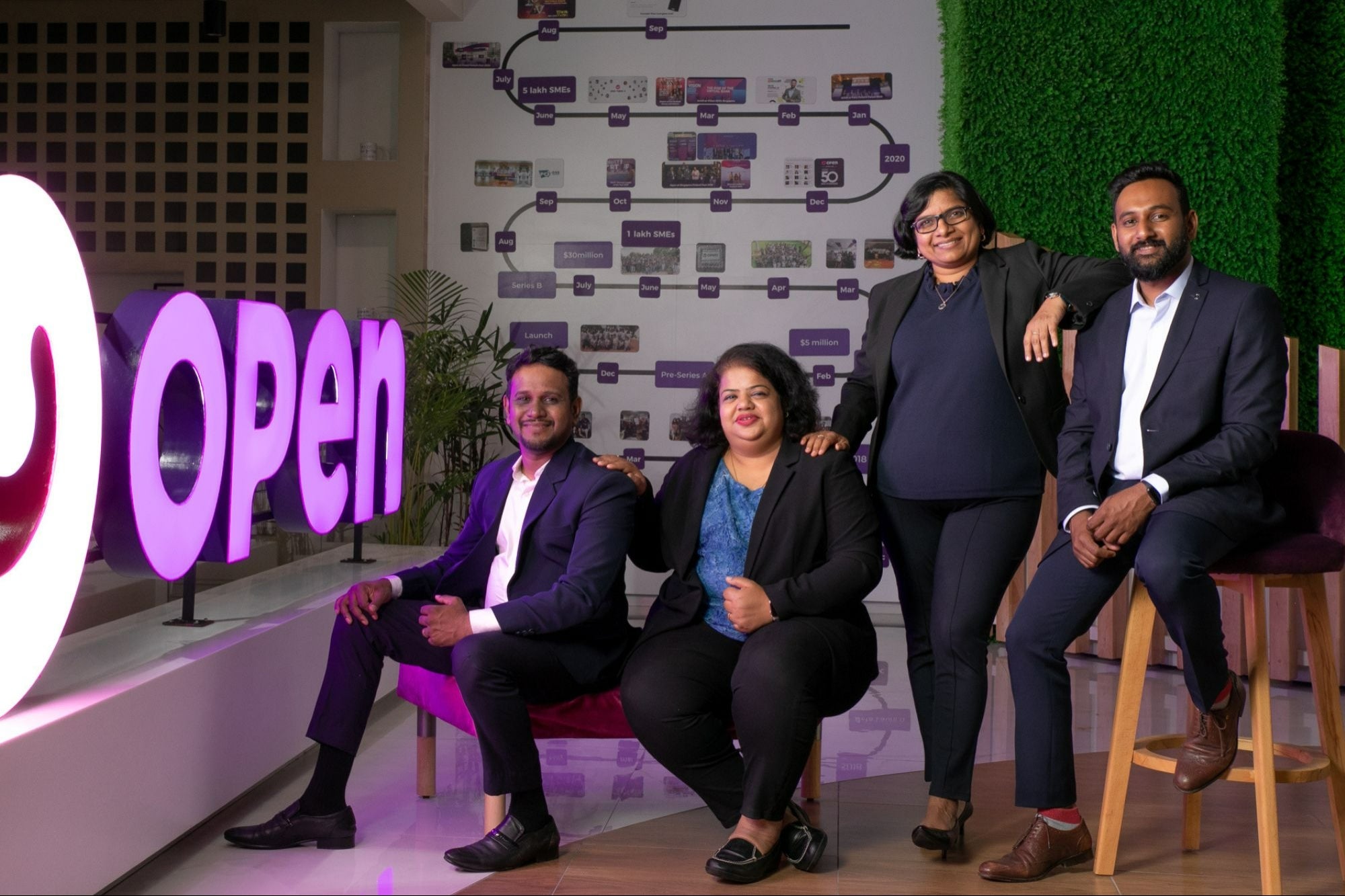 Anish Achuthan, co-founder and CEO of Open decided to embark on the adventure of entrepreneurship when he was only 15 years old. This was after reading the inspiring story of Sabeer Bhatia from Hotmail. There has been no stopping since.

From running away from home right after class 10 and living in a temple for two to three years to launching 4 fintech startups before Open, including iFuturz Wireless in 2001, CashNxt in 2077, Neartivity Wireless in 2009 and Zwitch in 2013, he did it all.

How Achutan became an entrepreneur

Born and raised in a small town near Kozhikode, Achutan’s first childhood dream was to become a journalist. To achieve this dream, he read many newspapers and magazines every day from the age of 7 or 8. By age 10, his reading habit exposed him to a lot of things like the internet, even though he was 300 kilometers away. to have internet access. This prompted him to create his first email id when he was just 12 years old. He thought dot-coms were a good way for him to connect to the world as a journalist. And after class 10, he went on to create a dot-com portal similar to Rediff and Yahoo News, which had reviews, movie reviews, etc.

It was also then, in 2001, that he read the story of Sabir Bhatia and how he built Hotmail. This inspired him to become an entrepreneur. Coincidentally, he also read in a Sunday supplement about the concept of venture capital. “It made me think that you don’t have to be born into a wealthy family or have a lot of money to start a business,” he said.

After that he ran away from his home and moved to Trivandrum. For nearly three years he remained in the temple, where he was fed prsade which was basically a meal and he was allowed to sleep there. During this period, he continued to meet his three friends, his co-founders, who used to go to college. Later, the portal was acquired by a popular media group. This is how Achutan began its entrepreneurial adventure.

How Open was imagined

Achutan and his co-founders Ajeesh Achuthan and Mabel Chacko had about 10-12 years of experience in the fintech space before launching Open, which is their fourth startup together. They used to deal with many small business owners who talked about the weak points of traditional banking methods. They felt that these entrepreneurs had a lot of trouble keeping track of their cash flow, managing their accounting, payroll, etc. There was no integration between these systems and it took a lot of time and energy from these business owners.

“We thought the best way to solve this problem was to use banking services, because your checking account is where all your money comes in and goes out. And if you’re able to reconcile that automatically with your accounting system and your payroll, it can help entrepreneurs save a lot of time and they can focus on their core business,” he told Achutan.

So Achutan and others, along with Deena Jacob, Open’s fourth co-founder, who was with Taxi For Sure earlier and was one of Achutan’s startup clients, decided to launch Open in 2017.

On May 2 this year, Open announced its IIFL Series D funding round with existing investors Temasek, Tiger Global and 3one4 Capital and with this round, Open was valued at $1 billion, which in made the 100th participant in the Indian unicorn club.

How the offers have evolved

Open’s initial offering was a business bank account with a suite of tools to help businesses manage their receivables and payables. “If before an entrepreneur used multiple tools like a bank account, separate invoicing software, separate accounting software, we brought them all together in a unified platform,” he said.

Today, not only are more than 23 lakh companies using the platform, but Open is also an end-to-end financial automation platform based on bank accounts. So unlike your traditional bank, where you open a checking account and get internet banking just to transfer funds and management statements, Open offers a rich dashboard with lots of automation, which takes care of the reconciliation of customer payments, payroll, GST, compliance and all.

And over a period of time, the co-founders started adding features like things to manage one’s expenses online by helping them issue different cards to different departments or different employees, etc. Today, Open processes approximately $30 billion in annualized transactions on the platform.

In the process, they also realized that many of their banking partners were also trying to launch neo-banks as the current banking dashboard they offered was not really in line with the needs of today’s customers. today. “So they started approaching us and we realized the need to create a corporate banking division,” he said. Open created this division a year ago, which today deploys neobanks for about 15 or 16 banks in the country. It also has ongoing deployments in the Philippines and the Middle East.

How a good decision became a turning point

According to Achutan, one of the best decisions he and other co-founders made was to partner with one of the banks eight or nine months into their journey, with exclusivity for nearly a year. in exchange for distributing its platform to their existing set of customers. .

“We weren’t sure if we should go for exclusivity or not. But this decision actually worked very well for us, because it helped us establish our product among the initial group of customers, because SMEs or business owners today don’t even trust banks, so how would they trust us?”

Achutan also talked about some key mistakes they made along the way. “I think some of the mistakes were probably made at the very beginning of the business when we tried to bring in people who probably had 10-15 years of experience when the processes weren’t defined. I think every step of the business requires a different skill set. Then the second mistake was saying no to some banks. Our business division was getting a lot of requests from banking partners to help them start their own neobank, but we thought that it would cannibalize our existing business and we said no to many.”

How Openers Collaborate and Work

Open is a 530 member team today and when it started there were 20 people. “All the first teammates I used to work with, I had worked with them for the last three, four organizations together. And we had also been very, very selective about who we hired. really in the company. Very early on, we had someone to lead our people and culture function who set the guidelines for what the culture would be and what kind of people to hire,” he said.

Achuthan thinks there’s still a lot you can do from an HR perspective, but people won’t sense it unless you get the DNA right from the start. He thinks Open had all the makings of a cultural disaster, with 80% of the initial team made up of people he had worked with before and 80% from Kerala. However, it was this DNA that held them together. Today, the startup has people from 21 different states.

Culture is also based on other factors. For example, 35 to 30 percent of the people in the organization are people who are not generally considered employable by other companies. For example, there might be people who took a 10-year sabbatical. Achutan believes that when such people are recruited, trained and given opportunities, the team develops a family bond.

“When you work at Open, everything is taken care of like family. And when the pandemic happened, unfortunately, we lost a few of our employees. The family members of those employees are now working in this organization. We don’t “I don’t put such things on social media, but it’s very important to us. And these are things that are not just company policy. All Openers come together in difficult times. And every manager has the right to make all the decisions that can help the employees in their team. From the start, we’ve all had a connection that helps us navigate any difficult situation together. When the bond is created from day one, I think it’s easier in difficult times, as everyone understands. “

“What motivates me as an entrepreneur is that I always want to create something. When people use our product, the satisfaction I get from it is immense. Or, when I see people talking about our brand, I would say that’s the biggest motivation for me,” he said.

For Open, the focus will be on the 61 million (approximately) MSMEs in the country. Achutan thinks they’ve barely scratched the surface and there’s still a lot to do. “So today what we’re doing is financial automation on top of banking, but now developing the lending products in terms of using that data to provide better capital to help those businesses to grow is our goal,” he said. In addition to focusing on MSMEs, Open also aims to become the default digital banking service.

Dear readers, you can also listen to the podcast of this interview here.