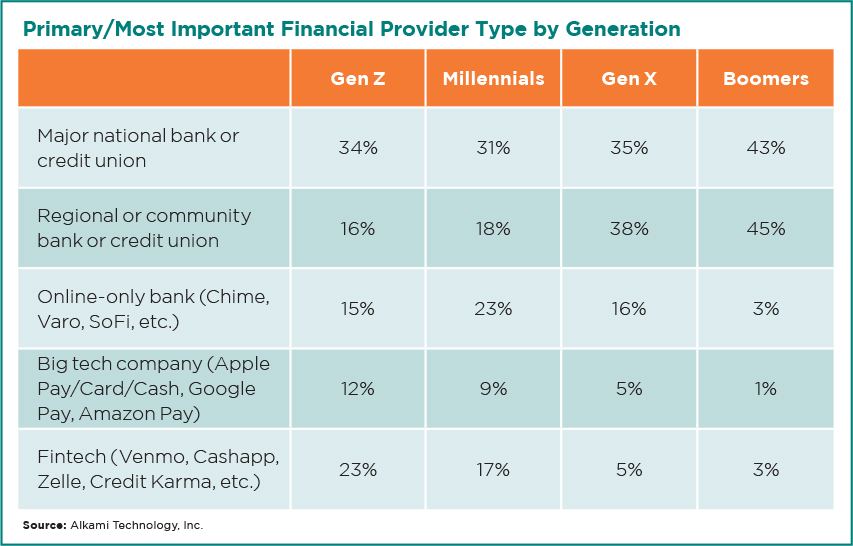 Generation Z is up for grabs

Jason Dorsey, a generational and behavioral trends researcher, handed his 11-year-old daughter (a very young Generation Zer) a five-dollar bill when she completed her chores.

He soon learned that the cash payment was a mistake.

“She was like, what am I going to do with the money? How am I going to spend this? What should I do… push it into my iPhone and all of a sudden it will work? Dorsey recalled during a recent webinar for credit unions and banks. “It was so funny to me because in her mind she was like…money? One is dirty. You don’t touch it. She learned that in school and in pairs, whatever she wants to buy, she buys it using a mobile device. For her, money is digital.

Generational trends, especially among Gen Zers and Millennials, are not shifting in favor of credit unions, community banks, and regional banks. Still, according to Dorsey, millions of young Gen Z consumers are “really up for grabs.” But, he added, community financial institutions need to move quickly to compete with them, as fintechs, neobanks, big banks and big tech companies are working aggressively to grab the lion’s share of the market. their activities.

The size of Generation Z, those born between 1997 and 2012, is around 68 million. Millions of them are young working adults who use a wide range of online and mobile financial applications. However, new research has shown that at least 25% of these Gen Zers are still looking for a financial provider who can offer them the products and services they want and need now and well into their future. .

During the webinar, Dorsey highlighted the latest research findings from Alkami Technology’s Digital Banking Transformative Trends Study, based on a nationwide survey of 1,500 U.S. consumers from Gen Z, Millennials, Gen Xers and Baby Boomers who hold a bank account and are active in digital banking. The study noted that 22 to 25 year olds from Gen Z were surveyed, and 26 to 35 year olds from younger millennials were also surveyed.

While the research revealed concerning trends among generations that are driving big changes in the financial services industry, it also presented promising opportunities for financial institutions, including credit unions.

The key, and not so surprising, revelation from Alkami’s new research is that engagement in digital banking is strongly correlated with greater penetration and adoption of financial institution products. Specifically, the study found that digital banking users who access their mobile app or online banking multiple times a day have 1.71 times more products with their primary financial institution (PFI) than those who access digital banking services at least once a year. According to the study, that’s a big difference.

A surprising finding from the study is that the type and size of a financial institution and/or technology company appears to have a significant impact on consumers’ expectations of their dealings with that organization in the future.

The study showed that consumers who are customers of regional and community banks and members of credit unions are less likely to believe that their relationship will develop with their financial institutions than those who do business with large national banks, neobanks or online-only banks, fintechs and big tech companies.

“This is one of the most important findings of the national study because it serves as a call to action for (regional and community banks and credit unions) and their leaders as they consider the urgency and importance of innovating to better serve customers and members,” the study said.

The study found that Gen Z and Millennials are much more likely to say a neobank, large tech company or fintech is their primary financial provider. Generation X and Baby Boomers are more likely to be customers or members of a large national bank or credit union, community bank or regional bank.

However, the encouraging news from the study is that younger generation consumers are currently exploring and testing different options to establish their longer-term financial relationship. According to Alkami research, 25% of Gen Zers were unsure about the future of their PFI relationship over the next year. Among younger Millennials, that percentage was 21%.

This opens up an opportunity, albeit a pressing one, to attract younger consumers at the right time and stage of life to build longer-term relationships as their financial needs grow. The study noted that these emerging generations are increasingly earning money and entering new, more financially complex life stages, including the generational transfer of wealth.

“For me, it’s very exciting because we’ve also seen it through our broader work. When we asked Gen Z and Millennials about money in general, they are always trying to find the right banking partner and the right banking relationship. there is no doubt. It’s also a time when they establish their loyalty,” Dorsey said. “And by the way, the number one generation to refer someone to their bank or credit union is millennials and generation Z. The younger you are, the more likely you are to tell other people about it. and the more likely they are to shift their banking relationship.

The study also found that consumers from all four generations want a “great digital experience.” But the study noted that nearly half of Gen Z and Millennials who had a bad digital experience with a financial provider opened an account with another financial institution.

What can be a critical part of this great digital experience for consumers is providing them with an app that offers a convenient, easy, and secure way to make payments and transfer money. Kelly Payne, director of marketing at MOCA, an Austin, Texas-based fintech that serves credit unions and banks, noted that these mobile app features have made neobanks and fintechs market leaders in the field. payments. MOCA leaders believe that one way to address this competition is to help financial institutions set up a neo-banking style mobile application under their brand to offer to their members/customers, he said.

“Everyone is trying to figure out what to do with neobanks and fintechs, and the conventional wisdom is to open a digital branch,” Payne said. “It’s expensive, it takes time, it’s risky. But why not offer a neobank type account internally? You’ll still need some expertise, but it’s a lot less risky, it’s faster time to market, and you’re targeting people who love the ‘Chime app’ experience, but also want walk into a branch, and they appreciate the confidence and security that an established financial institution can provide.

Despite common beliefs, Gen Z has a slight preference for traditional banks over neobanks due to concerns over digital security, according to MOCA.

Credit unions can also appeal to Gen Z with safe and secure payment technology, such as real-time, two-way anti-fraud messaging that uses text messaging to alert members, and card checks for cards. credit and debit.

Perhaps unsurprisingly, four of the 10 attributes relate to the goal of improving consumers’ financial health. These included: sending more relevant offers or rewards to fit the consumer’s lifestyle (listed by 42% of respondents to the Deloitte survey), understanding the consumer’s financial situation and offering solutions ( 34%), helping consumers achieve their financial goals (31%), and educating consumers or providing them with tools to help them become more financially savvy (26%).

These attributes may be even more important for Gen Z, as they grew up witnessing the country’s difficult and difficult economic times, noted Mickey Goldwasser, vice president of Payrailz in Glastonbury, Conn., a payments company. solutions offering predictive payment based on artificial intelligence. solutions to banks and credit unions.

For example, Gen Z and their families lived through the recessions that followed the dotcom bubble and 9/11, which were relatively short-lived economic downturns. But they also lived through the Great Recession, which lasted a year and a half, and young Gen Zers saw firsthand how foreclosures, small business bankruptcies and jobless parents affected their communities. Generation Zers have also seen how many millennials and Gen Xers are struggling with student debt.

As a result, Goldwasser said he believes Gen Z has learned to take financial responsibility seriously.

“They are more likely to weigh the impact of their actions, such as deciding to attend college, community college, or technical/trade school, against all of the financial benefits and risks involved,” he said. “They’re not inclined to buy something and then figure out how they can afford it. They want to know how they can afford to buy something they want, and that’s where a financial institution can step in and help them plan their financial goals and work with them as a partner to achieve their dreams. .

5 apps I use to save money while inflation rages