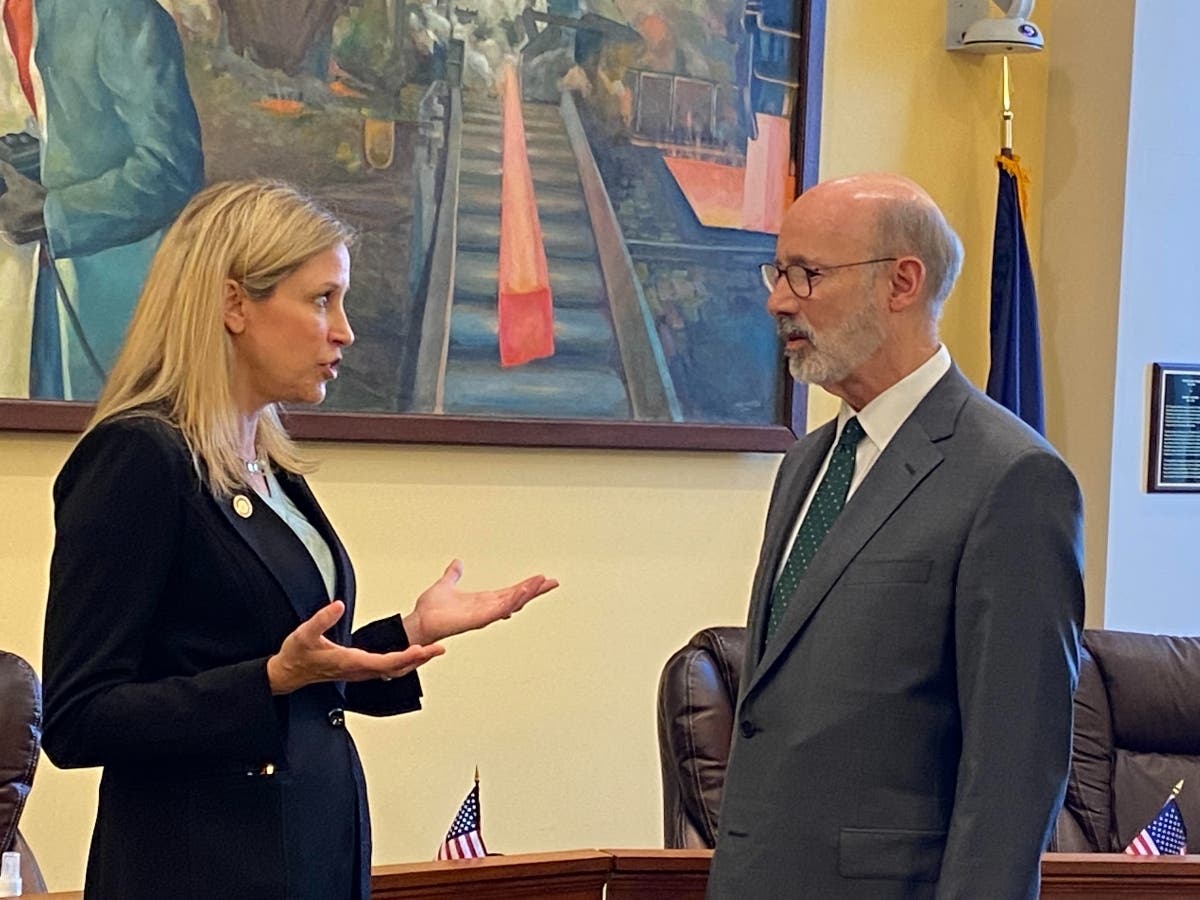 Standing in front of a mural of a man working on railroad tracks in Phoenixville Town Hall, Pennsylvania Governor Tom Wolf said Wednesday Keystone State was in a strong financial position to help recover from COVID -19.

“People across the Commonwealth are still recovering from the upheaval of the COVID-19 pandemic,” the governor told a crowd of about 40 borough staff and spectators, some wearing masks.

“The Commonwealth of Pennsylvania is in a strong financial position right now. That’s why it’s so important for us to take advantage of this opportunity to help Pennsylvanians. Inflation is high and everything from groceries to gasoline, is a bit more expensive than before.

“More than ever, now is the time to invest in helping our people get back on their feet. That’s why I’m calling for action and major investments to make life a little easier for everyone. Pennsylvanians.”

The governor, joined by local and state officials, said he grew the state’s ‘rainy day’ fund from $231,800 to $2.8 billion in seven and a half years of management of the state government.

Wolf said he has made education a top priority throughout his administration, including historic investments in schools and students.

It plans to add an additional $1.9 billion for K-12 education in its proposed $47.4 billion budget.

The governor said the investment will give schools the resources they need to deliver a world-class education to students, while reducing the tax burden on local communities.

He said the increased funding could help local governments reduce their reliance on local property taxes for school funding.

In Pennsylvania, Wolf said, the past seven and a half years have shown a steady increase in tax revenue from $1.3 billion to $1.4 billion a year, and revenue continues to show healthy growth.

“My plan for investing in the people of Pennsylvania is both bold and responsible,” Wolf said.

The governor said he expects Pennsylvania will still have a surplus of more than $3 billion at the end of the year, beyond the $2.8 billion in the “rainy day” fund.

Department of Revenue Secretary Dan Hassell said the Commonwealth is in a much stronger fiscal position today than it was two years ago when the pandemic hurt Pennsylvania’s economy.

“Revenue is strong, thanks in part to Governor Wolf’s strong management and the stimulus funds that have flowed into Pennsylvania from the federal government,” Hassell said. “Economists expect our economic recovery to continue, making this the time to make the historic investments the governor calls for in his budget proposal.”

During the governor’s welcome to Phoenixville, Mayor Peter Ursheler said the borough has recovered from the Great Depression to become a thriving community.

“For generations, Phoenixville has produced the iron and steel that has supported our country’s greatest monuments and the world’s bridges,” the mayor said. “After losing manufacturing facilities,” he continued, “Phoenixville was in an economic depression.

“Today, over 30 years later, like the mystical phoenix, we have risen from our ashes to become one of the fastest growing communities.”

Rep. Danielle Freil Otten, a Chester County Democrat, said Phoenixville is a great example of how the community is working together to pull itself together.

“We have breweries, restaurants and a great school district,” Otten said. “This year’s budget represents an unprecedented opportunity to help secure a brighter, brighter, healthier and more prosperous future for all Pennsylvanians.”

State Representative Melissa Shusterman, Democrat of Chester County, said Wolf’s leadership has put Pennsylvania in a position of economic strength to recover from the pandemic.

“Now is the time to leverage our state’s strong fiscal position to invest in Pennsylvanians by funding working families and supporting small businesses,” Shusterman said.

Zudy®, the leader in rapid digital transformation, releases Vinyl™ 3.2, the most advanced no-code platform available to the enterprise