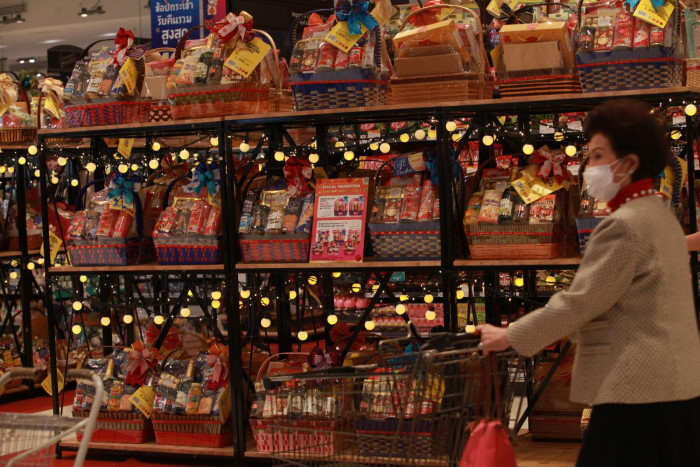 Packages to stimulate spending during a pandemic

On Thursday, a customer walks past New Year’s gift baskets at Siam Paragon. Mr Arkhom is optimistic as the consumer confidence index continues to improve.

The Ministry of Finance plans to introduce new stimulus packages early next year as a New Year’s gift to Thais, with the aim of increasing spending for people with high purchasing power amid the protracted pandemic , said Finance Minister Arkhom Termpittayapaisith.

He said the ministry was considering which stimulus packages to promote at the cabinet meeting on December 21.

The packages are aimed at boosting spending, especially among those who are keen to spend, Mr. Arkhom said.

He said a main package would focus on offering a tax deduction to people with purchasing power. It will replace the existing “Ying Chai Ying Dai” stimulus package (the more you spend, the more you get), which was not popular among the public.

The minister said that the launch of phase 4 of the “Khon La Khrueng” co-payment program after the expiration of phase 3 at the end of this year depends on domestic spending.

The program provides for the government to subsidize 50% of purchases of food, drink and general goods. The total grant is limited to 150 baht per person per day.

Consumer confidence rose for the third consecutive month in November, driven by an easing of Covid-19 restrictions, robust export growth and the country’s reopening, according to the University of the Thai Chamber of Commerce (UTCC).

The UTCC announced Thursday that its consumer confidence index rose to 44.9 in November, from 43.9 in October, 41.4 in September and 39.6 in August, the lowest level in nearly 23 years.

Regarding the Omicron variant, Mr. Arkhom said he is confident it will not affect New Year’s activities.

The government has been monitoring this variant closely and continues to implement public health measures, he said.

Recently, Mr. Arkhom said the government is ready to inject around 1,000 billion baht into the economy next year to protect itself from the volatility caused by the Omicron variant.

The government still has 250 billion baht of the 500 billion it borrowed using the second emergency loan decree to mitigate the impact of the pandemic on the economy.

The ministry predicts that the economy will grow by 1% this year and 4% next year, driven by the increase in foreign tourist arrivals, in turn enabled by the gradual decline in Covid-19 cases and the reopening from the country.

How banking regulators are trying to oust a Trump asset