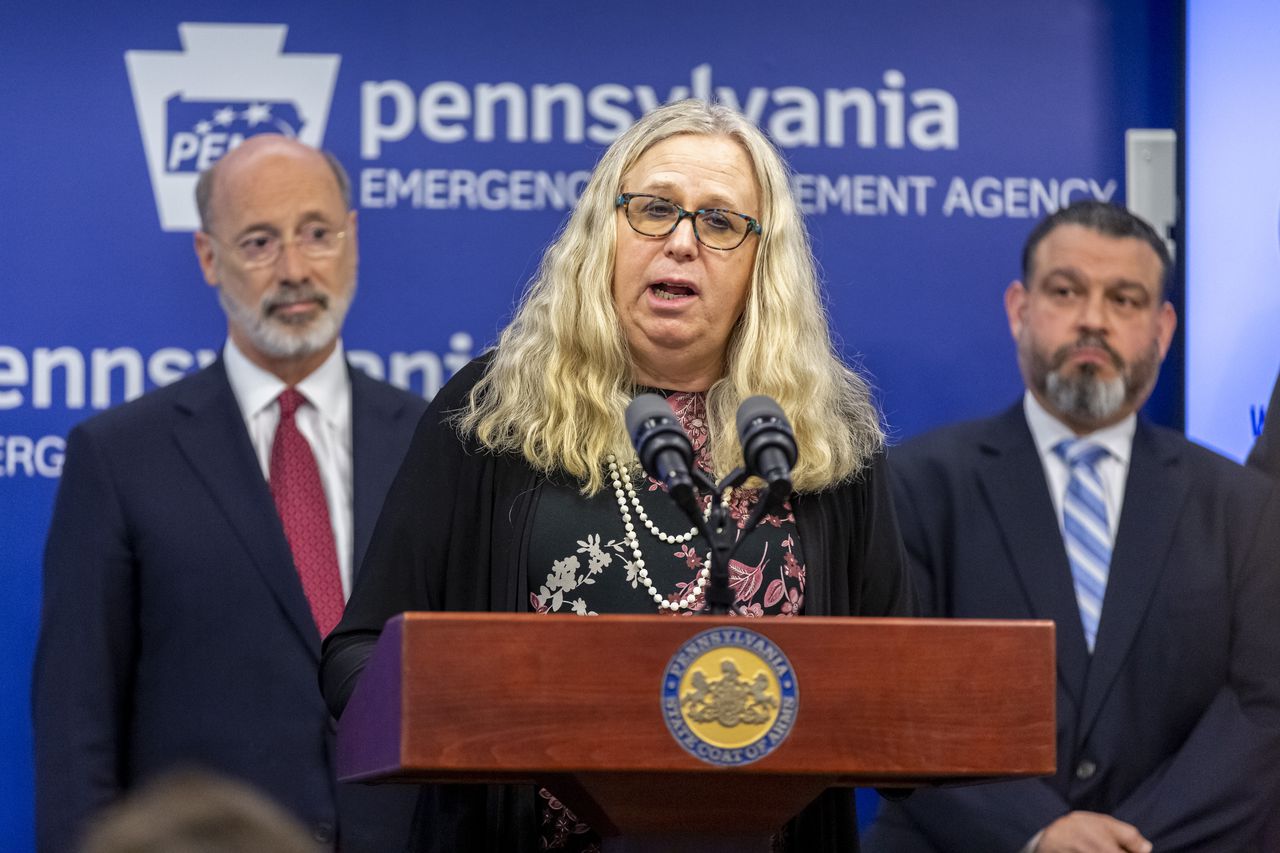 Dr Rachel Levine is no stranger to derision because of her gender identity.

A transgender woman, Pennsylvania health secretary Levine, has in many ways mirrored the undercurrents of transphobic trends in that country.

The transgender community has consistently resisted personal assaults, attacks on their civil rights, and disturbing rates of homicide of transgender and gender nonconforming people. Levine, perhaps unwittingly at times, served as a role model for Pennsylvania’s transgender community, negotiating hostile attacks even as she grappled with the life and death issues of the coronavirus pandemic.

This is one of the main reasons President-elect Joe Biden’s appointment of Levine as Assistant Secretary of Health resonates throughout the transgender community. It is a recognition and affirmation of a gender identity that has historically been assaulted and marginalized – literally and figuratively – both at the mainstream level and at the level of public authorities.

“She will absolutely be a mentor and a positive role model for countless trans and LGBTQ people across the country,” said Jason Landau Goodman, executive director of the Pennsylvania Youth Congress, a trans rights group. “She never paid much attention to all these enemies. She laser-focuses on her mission to help all people live full, healthy lives. This is what she will remain attached to. Whenever someone asks her how she does with these situations, she says that she is focused on her job and that’s all that matters, and that’s totally okay.

Levine, who has become the public face of Pennsylvania’s response to the coronavirus pandemic, is set to become the first openly transgender federal official to be confirmed by the United States Senate.

“Dr. Levine is a Pennsylvania treasure and now the nation will benefit from her expertise,” Goodman said. “As she did in Pennsylvania, she will remain focused on the mission of protecting the health and well-being of all. She will continue to pay particular attention to the health of vulnerable communities, including LGBTQ people. I have known Dr. Levine for over a decade and have always been inspired by his leadership, authenticity and wisdom.

In recent years, the transgender community has had to repel a campaign to deny its members their civil rights.

In 2017, just weeks after taking office in the White House, President Donald Trump rescinded Obama-era guidelines on allowing transgender students in schools to use the toilets of their choice. Last year, in the midst of the pandemic, the Trump administration rolled back Obama-era health protection for transgender patients. Some conservatives have argued that the rule allows patients to force doctors to perform gender reassignment surgeries.

On a personal level, Levine has experienced an equal measure of transphobic assault.

In June, the Bloomsburg Fair came under fire after the fair’s social media account featured a photo of a man in a floral dress and wearing a blonde wig. The man, who was attending a dunk tank fundraising event, was impersonating Levine.

Then, in July, Republican State Representative Russ Diamond subtly mocked Levine, pilfering the very words the doctor was using to talk about anti-trans incidents to support his opposition to wearing face masks.

For the transgender community, one of the most vulnerable demographics in the country, the incidents against Levine, a transgender woman, were integral to the ongoing assault on their community.

Yet many members of the trans community credit Levine with the response and handling of these incidents, as well as his leadership and poise under fire as inspiration.

“It’s incredibly important,” Preston Heldibridle said of Levine’s appointment to the federal post. “I’m very excited about this. Anything we can do at the state level to protect trans lives should happen at the federal level so that trans people, no matter where they live, can live like everyone else. Having that perspective at the forefront at the federal level, I think it’s going to be huge. “

A state political associate for the Pennsylvania Youth Congress, Heldibridle, a transgender man, was in high school when the Trump administration four years ago canceled federal protections for the trans community. This prompted him to attend a panel discussion chaired by Levine.

He directly credits Levine for his foray into the defense of the trans community.

“Managers don’t always have an inherent level of understanding of the issues,” Heldibridle said. “With her in that position, we were able to sort out the direct issues. It was really powerful, certainly for me and for everyone in the room to see that when we sit down at the table we can get things done to protect our rights and protect the very things that allow us to live as anything. the world.

Goodman and Heldibridle, who have known Levine for several years, say they’ve never seen her let assaults on her identity shake her up or distract her from her job.

“I don’t think you can get past the level of vitriol she had to deal with,” Heldibridle said. “She didn’t let that get in the way of her work at all. She is very experienced in focusing on problem solving and getting things done. It’s something that I really admire about her.

Levine reflected on her service in the state on Tuesday, noting that she had “laser-focused on building a healthy Pennsylvania for all.”

“It has truly been an honor to serve the people of Pennsylvania under the leadership of Governor Tom Wolf,” said Levine. “He’s a great leader with an incredible vision for Pennsylvania, and it has been a highlight of my career serving in his administration.

Levine highlighted the department’s accomplishments in the areas of the opioid epidemic, fighting diseases such as HIV, and advocating for LGBTQ issues.

“I am proud of the work we have done as an administration to fight health equity and the work I have done personally to raise awareness of LGBTQ equity issues,” said Levine.

A pediatrician and former Pennsylvania general practitioner, Levine was appointed to her current post by Democratic Governor Tom Wolf in 2017, making her one of the few transgender people to hold elected or appointed positions nationwide. She won confirmation by the Republican-majority Pennsylvania Senate.

A graduate of Harvard and Tulane Medical School, Levine is president of the Association of State and Territorial Health Officials. She has written in the past on the opioid crisis, medical marijuana, adolescent medicine, eating disorders, and LGBTQ medicine.

Wolf congratulated Levine on Tuesday, calling her a “highly qualified and valued member” of his administration. The governor noted Levine’s accomplishments throughout his tenure, which, in addition to his critical management of the state’s response to the pandemic, include his role in establishing the medical marijuana program of state, national awareness of opioid use disorders and highlighting and promoting the need for medical care and access for the LGBTQ community.

“His work for our Commonwealth has been transformational and I appreciate him more than I can say,” Wolf said. “I and the people of Pennsylvania owe him a debt of gratitude for his leadership, strength and dedication to protecting the health of every person in unprecedented circumstances – and, at times, in the midst of hateful distractions. Dr. Levine is both competent and compassionate, and never lets the anger or fear of others distract her from her goals.

“This hateful rhetoric has * no * place in the PA or in our country,” Fetterman said. “I thank her for her service.”

Tesla Taliaferro, chairman of the board of directors of Rainbow Rose Center in York, a non-profit advocacy group, pointed out that Biden’s appointment of Levine speaks volumes about his qualifications,

“It really shows his credentials as a healthcare professional,” he said. “It’s also important to have that representation for the transgender community. “

Still, Taliaferro, a transgender man, said Levine is unlikely to use the post to directly advance transgender issues.

“Dr. Levine has put aside his identity policy in favor of promoting the health and well-being of every Pennsylvanian and I know she will do the same for the entire American population,” he said. he said. “Although she is very proud to be a trans woman and the trans community is extremely proud and in awe of her, what is most important to her is to ensure the well-being. people. “

In a statement released to the press, the Rainbow Rose Center noted that Levine’s appointment was “the perfect example of recognition and advancement based on hard work and education.” These are the values ​​our country was founded on and Dr. Levine will actively work to make America better and healthier for all.

Wolf said on Tuesday he hopes to name a replacement for Levine later this week.

Best performing banks in Nigeria judging by the numbers – Nairametrics