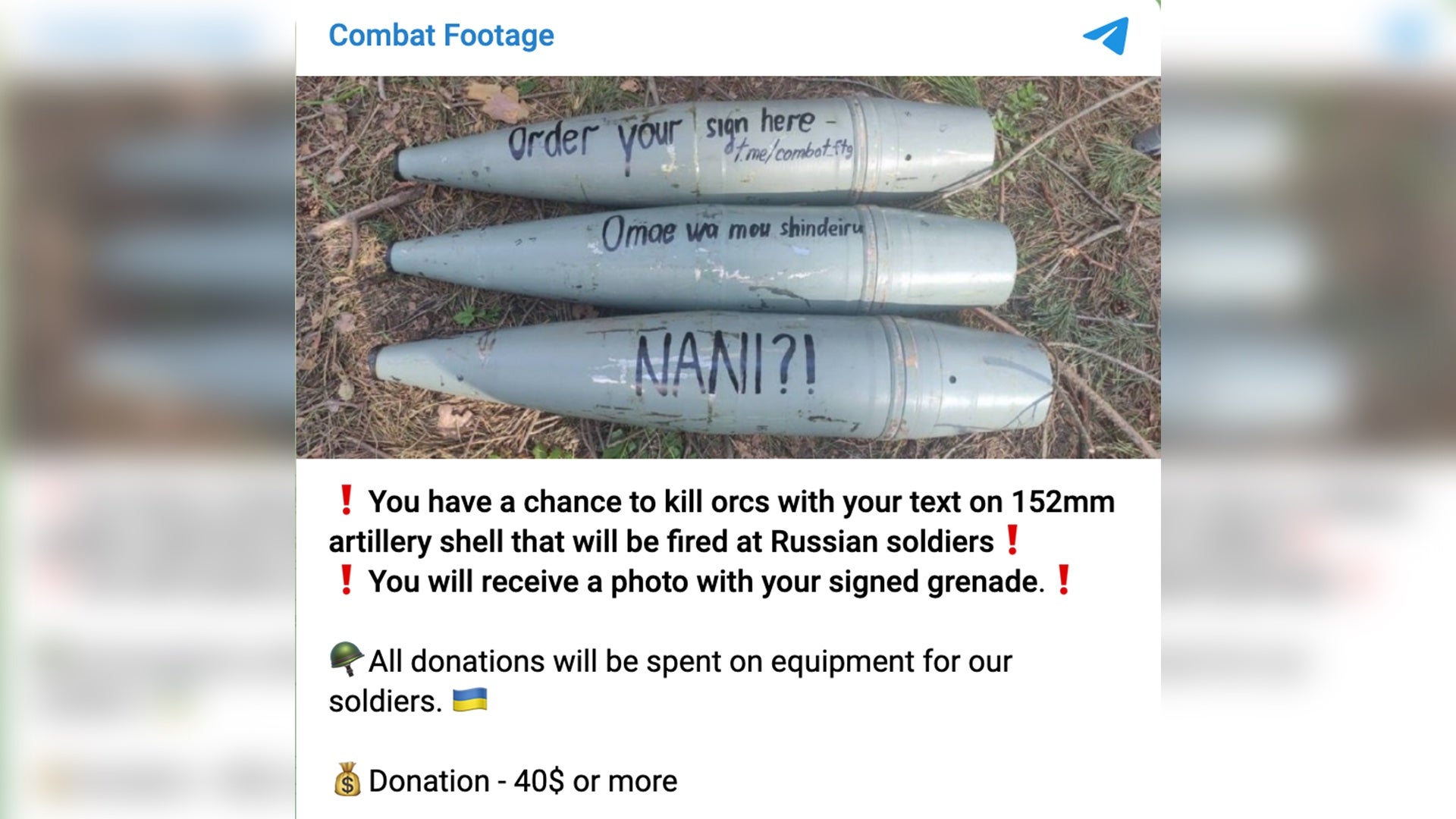 If you have something to say to the Russian army, well, here’s your chance. A Telegram account in Ukraine solicits messages which, for a fee, are painted on various artillery shells fired at Russian front lines.

As reported by Motherboardan account on Telegram called artillery_text advertises its services on the app through another account that shares footage of the invasion of Ukraine.

“You have a chance to kill orcs with your text on a 152mm artillery shell that will be fired at Russian soldiers”, read the message. “You will receive a photo with your signed grenade.”

So for $40 you can send your own message, and apparently it will be forwarded to a Ukrainian artillery unit, where they will write it down and take a picture before sending the shell remotely. There are even discounted prices – $10 off – if you order two posts.

“You can ask to write any text: wish someone a happy birthday/died in pain/proposing marriage/name/instagram username/telegram,” the wartime ad continues.

The message includes information for Paypal, Venmo and Revolut accounts as well as a bank account number for wire transfers, and asks people to send a photo of their donation for confirmation.

In an interview with Motherboard, the administrator of the artillery_text account said he was a 20-year-old computer science student who started making Molotov cocktails at the start of the invasion. He quickly moved on to posting images from the front lines on a Telegram channel and asking for donations for Ukrainian troops, where he saw soldiers signing artillery shells. After seeing another account with a similar concept raise $3,000 in two days, he launched artillery_text.

According to the administrator of the artillery_text account, donations are used to purchase equipment for Ukrainian troops. The account complaints having raised approximately $11,000, which was used to purchase two Starlink satellite systems, a thermal goggle and a car to evacuate wounded soldiers from the front lines.

It is apparently also extended beyond artillery shells. Another advertisement offers, for $400, the possibility of attaching a message to a Buk surface-to-air missile system.

In the comments section, there are several apparent customer responses and an apparent photo of one of the shells, which reads “All pigs must die”.

Soldiers writing about artillery shells are nothing new. It’s been about as long as there have been artillery shells. More than 100 years ago, during the First World War, there were soldiers in France signature shells as they were loaded into the breech of a gun.

There is this famous picture from 1945 of two gunners, T/5 William E. Thomas and Pfc. Joseph Jackson holding seashells that read ‘Happy Easter Adolf’ and ‘Easter Eggs for Hitler’.

Another photo, taken shortly before an April 1944 attack on the German battleship Tirpitz, shows a British sailor aboard HMS Furious, signing a 1,600 pound bomb with the message “Tirpitz it’s yours.”

herea member of the British Army’s Jewish Brigade can be seen in Italy with a shell inscribed ‘Gift for Hitler’.

More recently, members of the Jordanian army could be seen signing bombs used in airstrikes against Islamic State. “The host will be defeated and they will turn their backs and flee. From a brave Jordanian woman to you, Baghdadi,” read such message.

The graffiti artillery shells shared by artillery_text are not the first examples of this conflict.

The day after April 8, 2022 strike at a train station in Kramatorsk, Ukraine, which killed 52 people, a fragment of a Russian missile was photographed with “for children” scribbled on it.

But the chance to send your own message to a round of artillery halfway around the world is a distinct 21st century twist on the old tradition of military graffiti.

The last on task and purpose

Want to write for Task & Purpose? Click here. Or check out the latest stories at our homepage.